To anyone reading Sax Rohmer’s work today, the figure of Fu Manchu is, to put it mildly, problematic. But for young Emily Hahn, the lurid tales were thrilling – and formative.

Her mother had set a rule that the six children of the Hahn household could only read for thirty minutes per day – but Emily’s appetite for the written word had led her to sneak off with a book for hours at a time. She rapidly exhausted the adventures of more respectable characters like David Copperfield and Huckleberry Finn. Hiding behind the peach tree behind her St. Louis home, Emily discovered Fu Manchu – a Chinese super-criminal bent on destroying Western civilization. 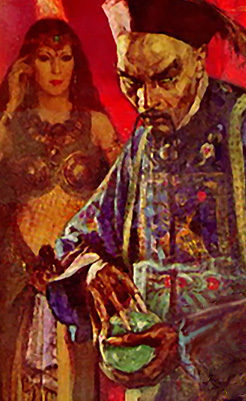 Rohmer’s fictional creation is starkly racist and Orientalist. The tone of the writing is fevered and exaggerated, and the figure of Fu Manchu became a notorious example of overwrought xenophobia for other authors to reproduce in their villains. More recent critiques point out that Rohmer’s books portray the famous villain as highly competent, skilled, and cultured – not quite the shallow caricature later derivations, films, and so on have left. Either way, Rohmer does not hold back introducing Fu Manchu:

“In his long, yellow robe, his masklike, intellectual face bent forward amongst the riot of singular objects upon the table, his great, high brow gleaming in the light of the shaded lamp above him, and with the abnormal eyes, filmed and green, raised to us, he seemed a figure from the realms of delirium.”

In addition to a trained marmoset, a secret society of criminal operatives, and a panoply of other exotica at his disposal, Fu Manchu was of course familiar with opium smoking – but only pretended intoxication, in order to trick the Westerners pursuing him.

Holding a needle in the flame, he dipped it, when red-hot, into an old cocoa tin, and withdrew it with a bead of opium adhering to the end. Slowly roasting this over the lamp, he dropped it into the bowl of the metal pipe which he held ready, where it burned with a spirituous blue flame.

household of four sisters and one brother

nicknamed Mickey by her mother, after an Irish-American journalist

idyllic childhood in St. Louis, followed by a move to Chicago that broadened her horizons further, w/ skyscrapers and the Art Institute

making friends was harder, though, and she imagined her Chicago classmates to be up to exciting adventures without her. “It was my private opinion,” she would later write, “that they were out cracking safes somewhere, or rolling around on the floor of some opium den.”