All of the books in this section contain both writing on the topic of opium paraphernalia and many beautiful photographs of unique collections. They also include chapters on other topics, such as the history of opium smoking, its presence in literature, and the like. 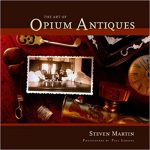 Steven Martin: The Art of Opium Antiques. This is an excellent book to start with, in terms of learning more about opium pipes and tools, their history, and their aesthetics. It’s relatively affordable, and easy to find, so it’s a good starting place for anyone just wanting to test the waters, so to speak. (128 pages, paperback, 20 x 20 cm, English.)

Carlos Armero and Ben Rapaport: The Arts of an Addiction: Qing Dynasty Opium Pipes and Accessories. This is a more comprehensive book that shows off a broader range of pipes and accessories from several collections, and goes into detail on many diverse subjects, including advice on collecting and archaeological insight into the pipe-making process. (219 pages, hardcover, 23 x 29 cm, English.)

K. Flow: The Chinese Encounter with Opium: Dreams of Colored Clouds and Orchid Fragrance. This is a massive – and expensive – book with an enormous range of items, exquisitely photographed and presented. Visually, it is the most extensive of any book on the subject I’ve seen; the section on pipe bowls alone, at fifty pages, is overwhelming in its variety and depth. The book also contains extensive chapters on opium and its social context, and is notable for its abundance of historical documents, from opium packaging to anti-opium propaganda. (426 pages, hardcover, 22 x 29 cm, English.)

Ferry Bertholet: Opium: la perle noire: art et histoire d’un rituel perdu. (French – other editions exist, but I haven’t found a copy of the English one yet.) This is another large pictoral work on opium pipes and accessories. It stands out for its beautifully composed photography, showing off very close-up details such as sculpted animal pipe saddles with gemstone eyes. (208 pages, hardcover, 27 x 31 cm, French.)

Dominique & Eric Delalande: Memories of Opium. This book accompanied the exhibition of the same title at the Louvre des Antiquaires in late 2011, which brought together some of the finest quality pipes and accessories. The text is a general overview of opium’s history, the smoking ritual, and other topics such as the functionality of different items in the smoking layout, but the real strength of the book is the pictures. It includes many beautifully shot photographs of exquisitely detailed items, including some of the most incredibly detailed silver work and cloisonne I’ve seen. (167 pages, hardcover, 26 x 29 cm, French and English.)

Another exhibition catalog worth picking up is Le dragon chevauchant les nuages, from a March 2010 exhibit of the collection of Arnaud Thomasson. While this is a short volume, the collection within is superb, with some of the more elegant black lacquer pipes I’ve seen. (87 pages, softcover, 29 x 21 cm, French and English.)

National Museum of History (Taipei): Centuries of Smoke Stains: The Art of Opium Utensils. This book is light on text, with only a few pages of introductory material (in Chinese), concentrating instead on detailed pictures of the collection of Wellington Wang. There are some fine and interesting pipes, bowls, lamps and tools, along with one or two pipes that look, to me, like some of the usual fakes. (127 pages, hardcover, 21×30 cm, Chinese with some English.)

Christian Fouanon & Ludovic Gagnaire: Opium, Voyage autour d’une collection. Published in 2017, this is the most recent addition to the opium collector’s bookshelf. With text on many subjects, including opium smoking in France, and photographs of pieces from the author’s collection. (103 pages, hardcover, 20 x 26 cm, French.)

Laura Brown: L’Art de l’Opium fumé. Though this book seems smaller and slimmer than some of the coffee-table style books listed here, it’s densely packed with text on the history, tools, and legends of opium smoking. Interleaved with many images, both historical and from several fine collections of pipes and paraphernalia. (217 pages, paperback, 17 x 24 cm, French.)

These books aren’t centered around collections of opium pipes, but retain the topic of opium smoking as a central theme, and offer additional perspectives that a collector may find interesting.

Zheng Yangwen: The Social Life of Opium in China. This is a robust work of historical scholarship, spanning five hundred years of Chinese history and tracing the evolution of opium consumption and its relation to every corner of Chinese society.

Peter Lee: Opium Culture: The Art and Ritual of the Chinese Tradition. This isn’t really focused on collecting – it’s more about smoking opium, its history and culture, and its risks and health effects. It contains interesting details about smoking opium that may offer insights into the functional and aesthetic aspects of antique opium paraphernalia.

Keith McMahon: The Fall of the God of Money: Opium Smoking in Nineteenth Century-China. This is a history of opium smoking that critically examines historical sources, both Western and Chinese, and illuminates their underlying cultural contexts in a world that was changing completely. Especially welcome is the heavy use of primary Chinese sources, including a translation of all of Zhang Changjia’s Opium Talk, an account of the experience of deep addiction.

Albert de Pouvourville (under the pseudonym Nguyen Te Duc Luat): Physique et psychique de l’opium. This is a unique book from the 1920’s, written by a French author who spent time in Southeast Asia. It seems a little eccentric at times, and generally Peter Lee’s Opium Culture covers a similar realm better. (The footnotes in the edition published by Blue of Noon do offer more historical insight into the world of opium and French Indochina in particular.)

Taras Grescoe: Shanghai Grand: Forbidden Love and International Intrigue in a Doomed World. This is a vivid history of Shanghai (and several of its notable denizens) in the 1930’s, a time and place where opium-smoking was ubiquitous. The story of American writer Emily Hahn and Chinese poet Zau Sinmay, crossing paths over the opium pipe, is particularly interesting, and the overall atmosphere and sense of Shanghai at the end of an era is palpable.

R. K. Newman: Opium Smoking in Late Imperial China: A Reconsideration. This is a scholarly article, a thoughtful re-examination of some of the historical data and perceptions about opium-smoking.

These are books I haven’t had a chance to look through yet, but look promising:

Don Duco: Opium & opiumschuiven. This is a book on opium smoking and opium pipes from Don Duco, curator of the Amsterdam Pipe Museum (Pijpenkabinet). One of very few Dutch books on the topic.

Alan Baumler: The Chinese and Opium under the Republic: Worse than Floods and Wild Beasts. This looks like an interesting historical perspective on the end of the era of opium-smoking and the changing attitudes that accompanied it.

Hans Derks: History of the Opium Problem: The Assault on the East, ca. 1600 – 1950. This looks like a very extensive history of opium-smoking in China and the colonial depredations of various Western countries associated with the opium trade. The book is wickedly expensive, however, at nearly $300 from the publisher even for just an electronic version.